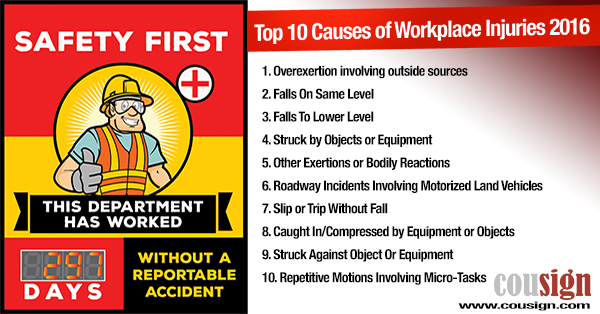 According to the 2016 Liberty Mutual Research Institute Workplace Safety Index the costs associated with the most disabling workplace injuries in the United States totaled almost 62 billion dollars in 2015.  While your safety programs aim to reduce these common injuries, the numbers don’t lie.  The same types of injuries rank similarly year after year.  While there are numerous steps you can take as a safety manager to reduce these types of accidents, we are firm believers that environmental awareness is key.

No surprise here, each year overexertion tops the list.  In 2015 this single category accounted for $15.08 billion in associated costs and is the bucket all those neck, back, hand and arm pains and strains get tossed. If your employees are doing a lot of handling such as pushing and pulling, carrying, holding, throwing, lifting and other activities that require the use hands and limbs you’re on the lookout for this one already.

We find this one under the broader category of Falls, Slips, Trips.  Falls on the same level include accidents involving stairs or steps, trips due to uneven surfaces or objects and everyone who was unfortunate enough to trip over themselves.  While these incidents were surely no laughing matter, we try to find levity when we can.  In all seriousness though, most of these types of accidents result from slipping on wet floors or slipping on snowy surfaces.  Falls on the same level racked up $10.17 billion.

When equipment or structures collapse or workers fall through a dilapidated roof or floor the injuries are tallied here.  Falling from stairways or ladders to a lower surface or off of roofs or other elevated areas are the most common of these types of accidents.  Falls such as these are consistently ranked among the top three most common workplace injury categories. $5.40 billion.

Struck By Objects or Equipment

$5.31 billion dollars were allotted from these accidents involving such things as tools falling directly on any part of the workers' body as well as falling debris or heavy objects. While some of these accidents are as mundane as books hitting the head of the worker others have involved being struck by nontransport powered vehicles.

Other exertions or bodily reactions

Bending, climbing, crawling, reaching, twisting, stepping, standing, kneeling, sitting, walking, running, boarding, alighting.  What?  Yea, we had to look that one up too.  These types of injuries accounted for $4.15 billion.

Collisions on the roadway, object or animal strikes with a motorized vehicle, jack knifed or overturned vehicle accidents , vehicles ran off the roadway, sudden start or stop on roadway accounted for $2.96 billion dollars in injury related expenses.

Slip or trip without fall

Even accidents attributed to slipping on substances or surfaces that did not result in a fall accounted for nearly $2.35 billion.

Caught in/compressed by equipment or objects

Struck against object or equipment

US companies were on the hook for $1.85 billion in related costs when accidents involving bumping into, stepping on, or kicking objects occurred in 2015.  Accidents in this category also included being pushed or thrown into or against objects or resting and stationary equipment.

We’re thinking carpal tunnel syndrome on this one. $1.82 billion dollars was anteed up for injuries involving repetitive use of tools and equipment such as typing, key entry, texting, grasping, placing or moving objects.  Any minute task done over and over has the danger to result in this type of injury without precautionary measures.